A video poem for Winter Solstice. In December 1998, the HeArt Project invited artists from different cultural and religious backgrounds to make art with teens about various winter holidays. Media artist Cheri Gaulke worked with Clean and Green, youth that are employed to clean up the city. Gaulke taught the kids about the earth-centered pagan tradition and the significance of the Winter Solstice, the longest night of the year. The youth worked with the idea of bringing light back into the darkness as a metaphor for what they would like to change in their community. The title, Dar a Luz, came from a brainstorming session which revealed that the Spanish phrase meaning “to give birth” translates literally as “to give light.” In four class sessions, the youth created a Yule Log and collectively wrote a poem. They shot the video footage of cleaning up a neighborhood and lighting the Yule Log. They also learned some basic digital editing skills. Gaulke did the final edit, piecing the elements together with music to complete this video poem for Winter Solstice.

Credits: Directed by Cheri Gaulke with words and images by students from L.A. Conservation Corps’ Clean and Green program at the Esperanza Community Housing Corporation, sponsored by the HeArt Project.

Dar a luz.
Darkness brings sadness.
All those people who are starving to death on the streets.
I’d like to see an end to poverty in my community.
To get rid of guns.
Dar a luz.
What I would like to see end is all the gang violence and crime.
An end to the shooting because people get hit.
An end to struggle.
Dar a luz.
I’ll pass the 8th grade and move from my neighborhood.
I’ll graduate from high school.
Dar a luz.
To give light in Spanish is to give birth.
As I leave the darkness, I run into the light.
We grow in the light.
We increase the peace.
We increase unity to help ourselves and future generations.
I would like to see the light, which everyone will light, on coming together.
Dar a luz.

You Can Hear It Singing 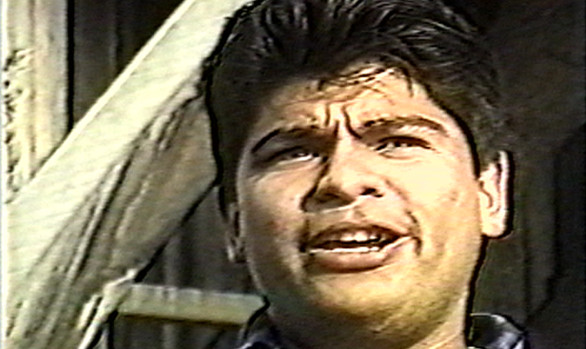