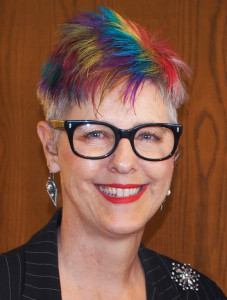 Cheri Gaulke has a Bachelor of Fine Arts degree from Minneapolis College of Art and Design and a Master of Arts degree (in Feminist Art/Education) from Goddard College. She has presented her work at the Museum of Modern Art (NY), the Museum of Contemporary Art (LA), in a Smithsonian-touring exhibition, and in settings all over the world including buses, churches, and prehistoric temples. She has received grants from the National Endowment for the Arts, the California Arts Council, the City of Los Angeles Cultural Affairs Department, and the Brody Arts Fund. Her work has been written about in numerous books and publications. She was recently inducted into the UCLA Oral History Program and in 2004 received a mid-career COLA (City of Los Angeles) fellowship.

In 1975, she moved to Los Angeles to be involved with the Feminist Studio Workshop at the Woman’s Building. There she embraced the notion that feminist art could raise consciousness, invite dialogue, and transform culture. She worked primarily in performance art from 1974-1992, addressing themes such as religion, sexual identity, and the environment. In addition to her solo work, she cofounded collaborative performance groups Feminist Art Workers (1976-81), which merged feminist art and education techniques into interactive performances; and Sisters Of Survival (1981-85), who wore nun’s habits in the spectrum of the rainbow and presented their anti-nuclear performances in Europe and the U.S.

Though Gaulke has moved away from performance, the feminist art strategies that she helped to innovate in the 1970s in southern California continue in her work. Her art continues to be a vehicle for social commentary and as a way to tell the stories of individuals and groups under-represented in society. She works in a variety of media, but mostly video, installation, artist’s books, and public art. Such projects have included a video in collaboration with lesbian and gay teens, a photographic wall installation about lesbian and gay families, a video installation with Latino teenagers about the L.A. River, and a video installation about kids’ perspectives on a river in North Carolina. Gaulke has completed three public art projects — a Metro-Rail Station in Los Angeles that tells stories about an oft-ignored urban river, an outdoor sculptural piece for a library in Lake View Terrace, and three stainless steel and glass glowing “Pillars of Community” for the City of Lakewood. A black granite memorial honoring the service of Filipino WWII veterans was dedicated on November 11, 2006 in a park in Historic Filipino Town, Los Angeles.

Article: “Acting Like Women: Performance Art of the Woman’s Building”