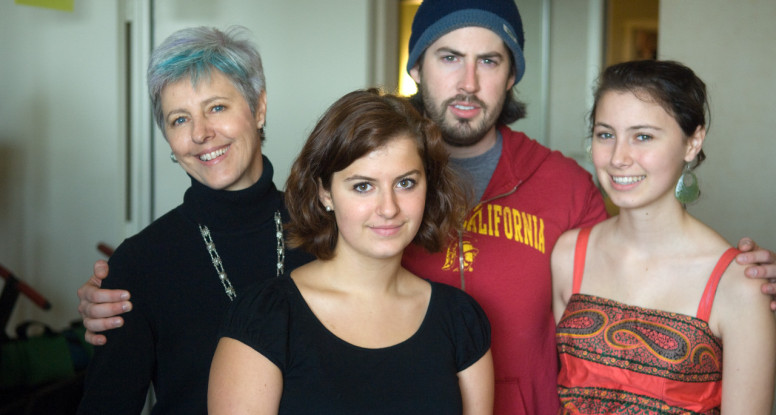 On the set of Jason Reitman’s film, Up in the Air

Recently, during my spring break, I visited St Louis where former student, Jason Reitman, was shooting his new film, Up in the Air. The film stars George Clooney as an executive whose job it is to fly all over the country and fire people. He spends all his time in hotels and is obsessed with reaching his personal goal of 10 million frequent flyer miles.

Jason Reitman graduated from Harvard-Westlake in 1995, the high school where I teach Video Art and am Chair of the Visual Arts Department. As a young filmmaker, Jason already showed talent. I remember watching him shoot a public service announcement and thinking to myself, “That kid is a director!” It was the first time I saw a student not only guiding the concept, camera work and editing, but also the actors’ performances. He won the top prize in a contest for that PSA which was about AIDS. He also cast an openly gay student in the spot, although the point of the piece is that AIDS was not a gay thing or a boy thing or a girl thing or a…..you get the idea. Jason went on to college, graduated and made a number of short films that screened at Sundance, then commercials and his first feature, Thank You for Smoking. Around the time of his second film, Juno, he reconnected with his former teachers at Harvard-Westlake (it was my colleague Kevin O’Malley who was actually Jason’s video teacher). Jason was the keynote speaker in our 2007 Harvard-Westlake Film Festival. We embarrassed him by opening the evening with his 10th grade PSA! He was a judge in our festival the following year. Last year, Jason, Kevin and I co-created a speaker series called Speaking of Movies in which Jason interviews cool people he knows in front of an audience. We videotape the talks and plan to post them on the internet soon. Our guests so far have been Diablo Cody (Academy Award-winning screenwriter of Juno) and Jonathan Dayton and Valerie Faris (directors of Little Miss Sunshine and numerous award-winning commercials and music videos). Coincidentally, Valerie and I knew each other back in 1984 when I stage managed a performance art piece she did with Lin Hixson and Molly Cleator.

My daughters, Marka and Xochi, spent the day with me on set in an airport hotel where they were shooting a series of short scenes with George Clooney. We learned a lot while we watched — the production designers change the room to become different cities, the director of photography experiment with still and moving shots, the prop master get the Blackberry to go off at just the right moment, the gaffers block out the windows with green screen material, the craft services guy who was also a sculptor and a founder of the amazing City Museum (if you haven’t been there it’s worth a trip to St. Louis!), and the excellent sound guy who gave me some tips. Between shots and while the crew was setting up for the next shot, Jason was a gracious host. He used his laptop to show us: clips from the film, scenes that were already edited (he’s going to premiere it in Toronto in September so his post-production is happening simultaneous to production), and some of his favorite stuff on youtube! Jason also introduced us to George Clooney and as you can imagine, the man is charming and funny (we loved listening on our headsets to the banter especially the bet between Reitman and Clooney as to whether the Blackberry would go off on cue). The day began at 9:30 a.m. and they broke for lunch at 3:30 p.m. We were exhausted and I went back to my folks’ house and took a nap! Meanwhile the film crew had another 6 hours of shooting.

It was an amazing experience for me as a teacher of film and video, as well as for my daughters who are young filmmakers themselves. This weekend Xochi and I are off to Seattle where her 7th grade film screens during the opening night of NFFTY-National Film Festival for Talented Youth. Then we return for the Sunday screening of her 9th grade film in the Newport Beach Film Festival. The next generation?