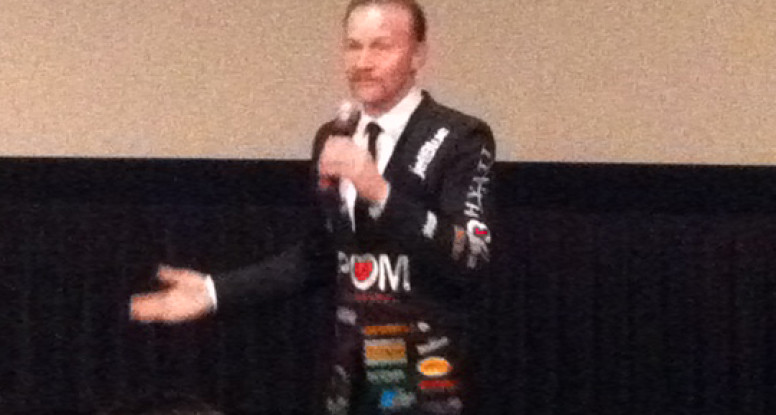 Media Literacy Comes To The Multiplex

Last night I attended a screening followed by a Q and A with one of my heroes — Morgan Spurlock. Spurlock’s new film POM Wonderful Presents The Greatest Movie Ever Sold was a look into the world of product placement in films. His concept was to make a movie about product placement that was entirely funded by product placement. Spurlock brings a wonderful personal style to his work – a balance of humor and social critique. He’s similar to Michael Moore but Spurlock projects more heart or at least personal warmth. At one point in the film he was psychoanalyzed by professionals that help companies determine what kind of brand they are. They decided Spurlock’s brand is a combination of mindful and playful. I’d have to say they nailed it.

Spurlock is an independent filmmaker, but to me he is also a conceptual performance artist.  The conceptual comes out in the way the film folds in on itself. The product and process are one and the same. He’s a performance artist in the way we used to mean it in the 1970s. Yes there’s a theatrical quality to his performance but more importantly there’s a kind of ritualized activity. He uses repetition and creates a public spectacle as he pushes the boundaries of his physical and emotional stamina. His audience serves as witness to his challenging journey of self-discovery. This can be seen most obviously in his first film Super Size Me (2004) in which he ate three meals a day at McDonalds for a period of 30 days. It started out funny but ultimately he put himself at physical risk and thus raised awareness about issues of diet, weight, health and class. His work has precedents in the tradition of performance art. One example is Eleanor Antin’s Carving: A Traditional Sculpture in 1972 in which she sculpted her own body through dieting and documented the process. Or the work in-progress Cut: A Traditional Sculpture by Heather Cassils who is doing the opposite by bulking up her body through a process of exercise and treatment. Cassils artwork is part of Los Angeles Goes Live for which I am also creating a new work for fall 2011. My performance about high heels is called Peep Totter Fly and like Cassils’ was commissioned by LACE for Los Angeles Goes Live: Performance Art in Southern California 1970-1983 as part of Pacific Standard Time, an initiative of the Getty. POM Wonderful is his primary sponsor earning the naming rights on the actual movie title. When Spurlock met with the company execs in the film I couldn’t help but notice the highly sophisticated art collection in their offices. I suspect on some level company founder Lynda Resnick also responds to the conceptual performance art aspects of Spurlock’s work.

As a high school teacher of Video Art I am grateful to Morgan Spurlock. He brings a media literacy message to young people like my students. Appearing in his film are many of the people I use in my own media literacy curriculum from Sut Jhally to Ralph Nader. Go see it. Help him meet his box office goals. You’ll not only laugh, you’ll learn something.

This may the only time you’ll see a naked man on my blog.